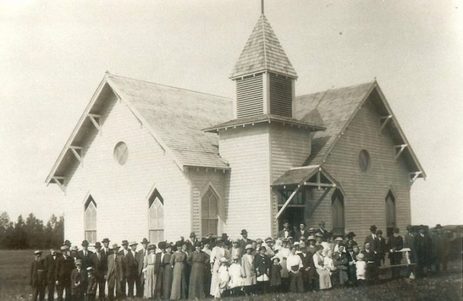 The history behind the little country church we call "The Glory House" is amazing and a testament to God's goodness!

This little church was built in 1898 by the "“Swedish Covenant of Slaughter,” a small congregation of believers that began meeting together in homes in December of 1894. It was constructed at a site five miles east of Wilton, North Dakota on land that had been donated by John Engstrom and was a place where believers met to worship God and to study His Word together. Some members of the congregation would walk to the services while others used horses and buggies or sleds and others came using oxen with hayracks. The journey was tedious and hard in the bitter cold of North Dakota winters or under the heat of the summer sun but no one seemed to mind.

​In 1915 the congregation was renamed the “Swedish Mission Church of Wilton" and decided to sell the little building that had made an impact in many people's lives.

The little church was used occasionally but then sat dormant until the 1980's when an offer was made to the congregation to turn the building into a bar. The congregation didn't want to see the building that had so much history and had been used so mightily by God to be turned into a bar so they contacted Trish Lenihan to see if the new ministry, Circle C Ranch, could use the building. This was an answer to prayer and soon the little church was once again filled with prayer, worship, laughter, and people seeking the Lord together.

After being utilized once again for many years, by the 2000's the building had fallen into complete disrepair and it seemed likely that it should be condemned and burned. But by the hand of God, people began to take a new interest in the building and during a 5 year process it was completely renovated and finished in 2016. The "Glory House" has become a beautiful building with hardwood floors, kitchen, handicap accessible bathroom, fireplace, wifi, electronic keyboard, a computer hookup for the projector and screen, and finally a steeple.

Once again the Lord used what was considered old, broken down, and unusable for His glory and is doing great things in the little building that was built so many years ago!

​
If you would like to reserve the "Glory House" for a ministry event please Contact Us for pricing, reservation, and a contract.
DONATE